Welcome to IsraelChai.com and Shalom!

The Torah and Israel

The Torah and the Temple

Rav Kaduri and the Messiah

The Revelation of the Name of the Messiah המשיח

Shortly before his death, Rav Kaduri wrote a note which he said contained the name of the Messiah המשיח who had appeared to him.  By Kaduri’s command, the note was not to be opened until one year after his death.  When the letter containing the note was opened, it appeared as below:

He will lift up (exalt) the people

Prove (convince, admonish) that His Word and His Torah

The names in Hebrew יהושוע and ישוע are the same derivation, and can be used interchangeably for the same name.  This is evident because in Zechariah 6:11 and Ezra 3:2 the two forms of the name are used for the same person.

And you shall take silver and gold, and you shall make crowns, and place [them] upon the head of Joshua the son of Jehozadak, the High Priest.

And Jeshua the son of Jehozadak arose, and his brethren the priests, and Zerubbabel the son of Shealtiel, and his brethren, and they built the altar of the God of Israel, upon which to offer up burnt offerings, as it is written in the Torah of Moses, the man of God. 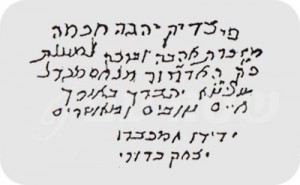 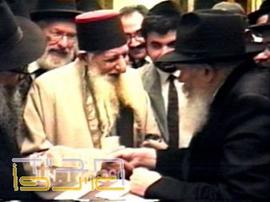 Rav Kaduri was considered to be a TSADIK צדיק  by Rebbe Menachem Mendel Schneerson.

reveal himself to Kaduri and tell him his name before Kaduri would die.

This was very significant because it was a confirmation of the prophecy that Rav Kaduri had received from the great Rebbe Yosef Chaim (Ben Ish Chai) of Baghdad in 1908.  The prophecy said the same thing: That Rav Kaduri would meet the Messiah המשיח before he died. 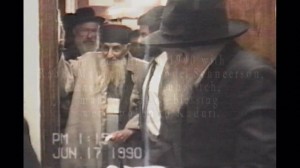 Early in 2004, Rabbi Kaduri said, “I have just seen the face of Moshiach.”

Rabbi Kaduri told his Yeshiva that the Messiah המשיח had revealed himself to him and that he had met with him.

He wrote the name of the Messiah המשיח in a note that was not to be opened until one year after his death.

This note is repeated here a second time:

The name is the same name that the Angel Gabriel  גבריאלgave to the Messiah המשיח before the time of his birth in Israel.

But while he thought about these things, behold, an angel of the Lord appeared to him in a dream, saying, "Joseph, son of David, do not be afraid to take to you Miriam your wife, for that which is conceived in her is of the Holy Spirit.  And she will bring forth a Son, and you shall call His name Yeshua ישוע (Jesus), for He will save His people from their sins."

Now in the sixth month the angel Gabriel גבריאל was sent by HASHEM to a city of Galilee named Nazareth,  to a virgin betrothed to a man whose name was Joseph, of the house of David. The virgin's name was Miriam..  And having come in, the angel said to her, "Rejoice, highly favored one, the Lord is with you; blessed are you among women!"  But when she saw him,  she was troubled at his saying, and considered what manner of greeting this was. Then the angel Gabriel גבריאל  said to her, "Do not be afraid, Miriam, for you have found favor with HASHEM.  And behold, you will conceive in your womb and bring forth a Son, and shall call His name Yeshua ישוע.  He will be great, and will be called the Son of the Highest; and the Lord G-d  יְהֹוָה אֱלֹהִים will give Him the throne of His father David.  And He will reign over the house of Jacob forever, and of His kingdom there will be no end."